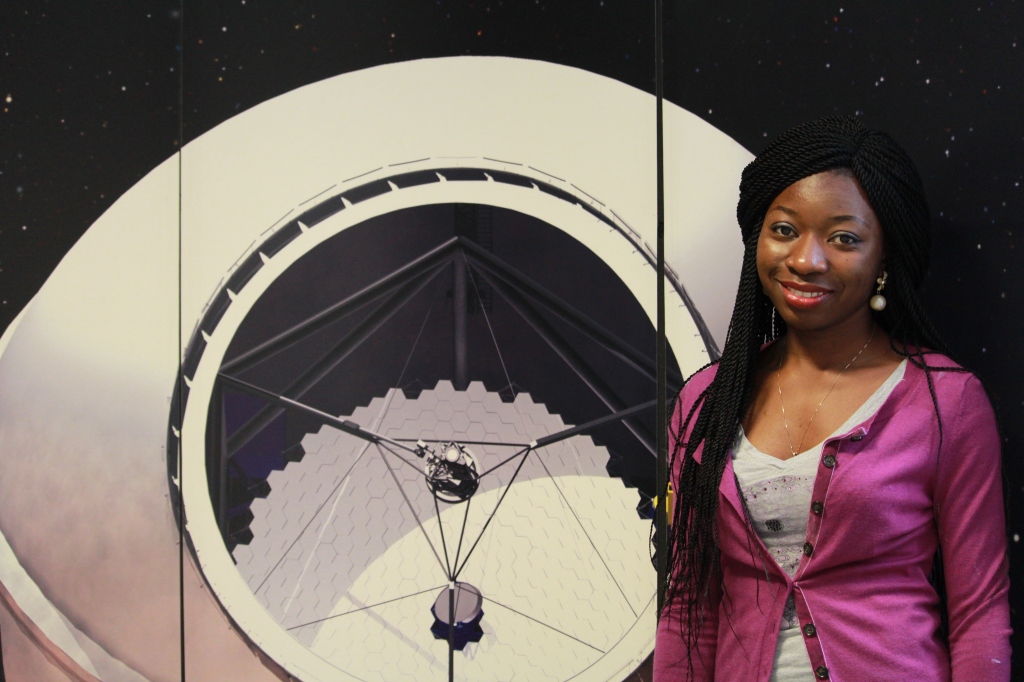 Margaret Ikape is an astronomer and a PhD student in the Dunlap Institute for Astronomy and Astrophysics, David A. Dunlap Department of Astronomy and Astrophysics, University of Toronto and has an MSc from the same department. She also studied at the African Institute for Mathematical sciences in Cameroon center. She completed her BSc at the University of Nigeria, Nsukka.

She is constantly trying to understand the universe and the things we see up in the night sky. She was recently a teacher at the West African Summer School for Young Astronomers, WAISSYA in a bid to expose young African scientists to Astronomy.

Afroscientric reached out to her, so we could bring you meaningful tips that have helped her in her career. This is the first part in a series of interviews with African women scientists.

Here are the questions we asked and her answers to them:

Afroscientric: What motivated you to go into astronomy?

Margaret Ikape: When I was about six years old, I was stargazing, and I saw a shooting star. From that moment on, the night sky became my favourite view. I would stare at it night after night, wondering what was out there and how cool it would be to take a trip to space.

In high school, I enrolled in geography class and one of the first lessons I learnt was on the solar system. I was enchanted, I wanted to learn more about all the cool planets and the rest of the universe, so I started to read astronomy books from the library. I later discovered that people spent their entire life studying these objects, and that those people were called astronomers. That’s when I decided to become an astronomer. I went into astronomy because I wanted to find the answers to astronomy questions for myself instead of relying on textbooks.

Afroscientric: What do you think is a major problem affecting the education of African women?

Margaret Ikape: It’s quite alarming that in most rural parts of Africa, the education of the girl child is not a priority. A girl child is seen as a commodity that will soon be bought, so their parents don’t see the need to educate or empower them otherwise. There’s also the issue of finances. Going to school is becoming more expensive and most parents tend to favour the male children in this regard.

I think our culture also has an effect on the education of African women. In Africa, girls are mostly encouraged into Arts or humanities, while science is left for the boys. The mindset that African women should stay home and tend to the home needs to be changed even in the minds of women themselves.

Afroscientric: What advice would you give young African women who are interested in STEM?

Margaret Ikape: My advice to anyone who is interested in STEM is to go for it. If you can think it, you can be it. Anybody can be whatever they want to be regardless of gender, race, etc. Determination and persistence are key. I will advise young African women who want to pursue a career in STEM to be determined in their pursuit and never quit even though tough times are sure to come, they should stay focused on their goal.

Afroscientric: What in your opinion is the most vital step in a STEM career for a woman?

Margaret Ikape: I think it is very important to locate other women in STEM mentors that you can look up to. This is a sure way to keep being motivated. Most women in STEM are aware of the gender gap and are willing to help. All you need to do is reach out to them.

Afroscientric: Who are some of your role models or inspirations and why?

Margaret Ikape: I have lots of role models who inspire me in different areas. My dad inspired me a lot while growing up. He always believed in me and my abilities and supported me all the way. I’ve also seen him break the norm in so many areas of his life and that makes him very understanding.

Staying up to date

Afroscientric: What online platforms and communities (if any) have had a positive impact on your career?

Margaret Ikape: I subscribed to weekly updates from Astronomy without borders while I was in a transition phase because I wanted to keep in touch with the community and keep up with new updates in the field. I was also a member of an astronomy WhatsApp group where we could post questions and receive answers from experts.

Afroscientric: Are there any scholarships you would recommend?

Margaret Ikape: For Africans with a Bachelor’s degree in mathematics, physics, statistics, engineering or computer science looking to go for a master’s degree, I would recommend the African Institute for Mathematical Sciences (AIMS). There are centers in 6 countries in Africa and can act as a very great launching pad into the bigger world. (Afroscientric recently published an opportunity in AIMS, click here to view.)

Afroscientric: What are your short-term career goals?

Margaret Ikape: To finish my PhD.

Afroscientric: What are your long-term career goals?

Margaret Ikape: I actually enjoy teaching, so I hope to teach in the future. I also love to share my excitement about astronomy with other people so I hope to engage more in outreach activities. And obviously, I still have unanswered questions about the universe, so I would love to continue with research.

Stay on the lookout for our next interview.