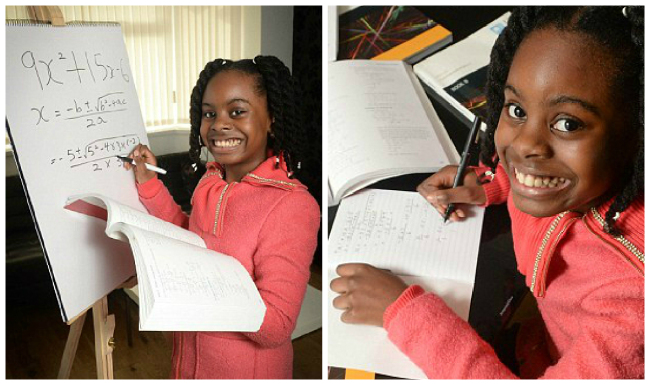 She spends her spare time in a similar way to many other ten-year-old girls – playing with Barbie dolls and making loom bands.
But the key difference between Esther Okade and other children her age is that she has been accepted to study for a university maths degree – despite not going to school.

Esther, from Walsall, West Midlands, has enrolled on an Open University course months after she passed her A-levels – and wants to study for a PhD before running her own bank.

The girl, who gained a C grade in her maths GCSE aged six, has joined the course which started this month. Her younger brother Isiah is already studying for his A-levels – also aged six.
The siblings are both home-schooled by their mother Omonefe, who has converted the living room of their semi-detached, three-bedroom house into a makeshift classroom.

Mathematician Mrs Okade, 37, said: ‘Esther is doing so well. She took a test recently and scored 100 per cent. Applying to the university was an interesting process because of her age.

‘We even had to talk to the vice-chancellor. After they interviewed her they realised that this has been her idea from the beginning. From the age of seven Esther has wanted to go to university.

But I was afraid it was too soon. She would say, “Mum, when am I starting?”, and go on and on and on. Finally, after three years she told me, “Mum, I think it is about time I started university now”.’

Mrs Okade added that Esther – who will study for her degree at home – was ‘flying’ and ‘so happy’ when she was accepted by the university, and wants to be a millionaire.

She said: ‘For now we want her to enjoy her childhood as well as her maths. By the time she was four I had taught her the alphabet, her numbers, and how to add, subtract, multiply and division.
‘I saw that she loved patterns so developed a way of using that to teach her new things. I thought I would try her with algebra, and she loved it more than anything.’